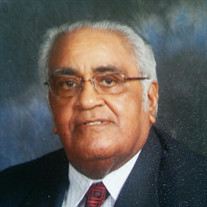 William A. (Bill) Jones, 83, of Upper Montclair, New Jersey, passed away peacefully on August 26, 20l7 in the Hearthside Commons Assisted Living Facility of the Job Haines Home in Bloomfield, New Jersey. Bill was born in Mechanicsburg, Ohio to Orland and Ruby (Howard) Jones. There, he was a member of the Second Baptist Church. Always passionate about music, he was an accomplished pianist. In fact, during his freshman year at Mechanicsburg High School, he wrote the school's "fight song" which is still being played today. After graduating in 1956, Bill studied at Ohio State University, receiving his Bachelor's degree in Education. From there, he went on to Atlanta University, where he obtained a Master's degree. He thereafter returned to Columbus, Ohio and was employed by the Ohio Department of Human Services as a social worker in the school system. In time, he was promoted to become the lead social worker for three entire school districts. It was during this time that he met and married Eulah (Burch) Jones from Bermuda. The couple eventually moved to Montclair, New Jersey. Bill continued his employment as a social worker with the school district in Newark, until his retirement in 1998. Bill and Eulah were active members of Park United Methodist Church in Bloomfield, where Bill was able to follow his musical passion and use his talents singing in the choir, playing the organ and piano, and joining the bell choir. He also participated in the group, “Ages Together,” where the senior parishioners interacted with the children of the church. The children all loved “Mr. Bill.” Bill and Eulah loved traveling in the United States, Canada and abroad, visiting England and Germany. They also spent time in Bermuda with Eulah’s family. He was also an avid fan of his alma mater, Ohio State, and attended many of their games. Bill was preceded in death by his beloved wife, Eulah (in 2003), as well as two sisters and a brother. Surviving him is his older brother, Orland (Bus) Frances Jones, 93, of Springfield, Ohio. Additionally, Bill leaves numerous loving nieces, nephews and great-nephews to cherish his memory.

The family of William Jones created this Life Tributes page to make it easy to share your memories.

Send flowers to the Jones family.