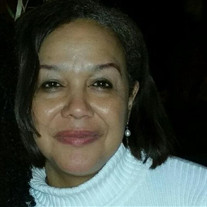 Saundra blessed this earth on January 7, 1959 in Detroit, Michigan as the second daughter of George and Marlene Webb. She grew up in Jersey City, NJ and attended PS#39 and Snyder High School during her formative years. Saundra then went on to New Jersey Institute of Technology to obtain her degree in Chemical Engineering. Saundra proved her intellectual acumen early in life having received Valedictorian status, and graduated early from both High School and College. She began her professional career at EXXON Corporation and shortly thereafter ventured into the world of entrepreneurship. Saundra started two companies during her time here: SANDAQ and later BI Group. Saundra was always open to a challenge and setting an example. Saundra looked for ways to help herself, her family and her community. She would often volunteer her time to speak to students at NJIT at provide any guidance so that future generations would have all the tools they needed to succeed. Saundra welcomed everyone in her home and made time to lend a listening ear, no matter the day nor the hour. She never judged and always offered words of positivity and optimism. Although she was very well accomplished academically and professionally, the accomplishment for which Saundra was the most proud of was her beautiful children: Sean, Portia, Austin and Noelle. Sandy as she was affectionately known, was born to be a mother, nurturer and teacher. She would make sacrifices to support all of her family and friends. The impact she had on everyone she met was far reaching. She touched lives. What was most astounding about Sandy was she enjoyed celebrating the happiness and success of others more than her own. This often showed in her infectious smile whenever she heard good news or greeted a friend. Sandy did not let anything stop her from fulfilling any goals. She never gave up, quitting was not in her nature. After having four children, she went on to earn a MBA from Duke University’s Global Executive Program. She was a “Super-Mom”. Sandy loved dancing, particularly salsa. She was an amazing woman with an upbeat nature and ‘go get it’ drive that will be sorely missed by all. Surviving are Sandy’s husband Yildirim Yilmaz, father George Webb (Aurie), Four loving children Sean, Portia, Austin, and Noelle, sister Sheryl Broughton of Virginia, brother Eric Webb (Earlene) of North Carolina also a host of loving aunts, uncles, cousins and friends. Sandy is predeceased by her mother Marlene Bluford Webb, husband Kenneth Edward Charles and brother Darryl Thomas.

Saundra blessed this earth on January 7, 1959 in Detroit, Michigan as the second daughter of George and Marlene Webb. She grew up in Jersey City, NJ and attended PS#39 and Snyder High School during her formative years. Saundra then went on to... View Obituary & Service Information

The family of Saundra Marlene Charles created this Life Tributes page to make it easy to share your memories.

Saundra blessed this earth on January 7, 1959 in Detroit, Michigan...

Send flowers to the Charles family.