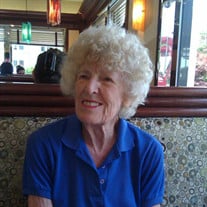 Ruth Edith Fowler was born in New York City on September 30, 1917, the second daughter of Annie O’Neill and Thomas Fowler. She died peacefully on August 26, 2021 at age 103. Her siblings were Letitia Isabel (married to Harry Edward Hile) and Thomas William (married to Alice Fritts). The family moved to Bloomfield, NJ where they lived at 83 Berkley Avenue for many years. Ruth graduated from Bloomfield High School and received a Bachelor of Arts Degree from Rutgers in 1968. She spent her career at The Prudential Insurance Company in Newark as an executive secretary to senior management, where her organizational skills were legendary. Ruth loved to play golf, ski, swim, dance and travel. She was an avid New York Giants fan, and she loved watching golf (when she wasn’t playing!) In later years her travel companions were often her sister Letitia and brother-in-law Harry. Together they visited Hawaii, Alaska and Europe. Ruthie was a wonderful aunt to her nieces and nephews: Lynn, Sandra, Tommy Robert, Bill, David and Alice Ruth. She was also adored by her grand nieces and nephews: Kate, Edward, Ben, Will and Aman, as well as her great grand niece Lake. Ruth was gregarious and always enjoyed a party, and lived independently until her late 80s, continuing to visit friends and family and maintaining a busy social and volunteer schedule. She was always a devoted friend, never hesitating to drive her friends to appointments or help them run errands. She helped her father, Thomas care for her mother, and then cared for him after his health declined. When her brother in law, Harry, was ill, she drove weekly to Long Island to help her sister with Harry’s care and to keep her sister company. The same when her sister fell ill: every Tuesday she brought lunch to Letitia, which they would enjoy at the beach overlooking Long Island Sound or in Letitia’s apartment in Mamaroneck, NY. Her last years were spent at Green Hill in West Orange, where she loved going out for lunch at Nevada Diner. We were often asked what we attributed Ruth’s longevity to – and our answer was that she had a big heart. She gave of herself to her family and friends willingly and often. A wonderful woman. Memorial Service, October 30, 2021 10:30 AM, Park United Methodist Church, 12 Park Street, Bloomfield, NJ 07003.

The family of Ruth Edith Fowler created this Life Tributes page to make it easy to share your memories.

Send flowers to the Fowler family.