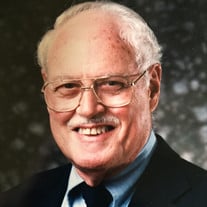 Robert J. Chamberlin, 96 of Glen Ridge, NJ, passed away on Thursday, March 31 2016. Robert was the beloved husband of the late Elizabeth Brady Chamberlin who passed away in 1982. He was also predeceased by his mother and father, Wilbur and... View Obituary & Service Information

The family of Robert J Chamberlin created this Life Tributes page to make it easy to share your memories.

Send flowers to the Chamberlin family.