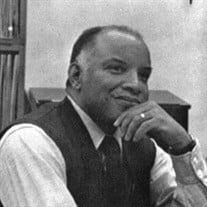 Richard Allen Holmes, MD, died peacefully at home at the age of 84 on Monday, July 25, 2016, at Sunrise Assisted Living in Washington, DC. He leaves behind his wife of nearly 50 years, Dodie Holmes; his daughter Mindy Holmes (Washington, DC); his son Adam Holmes (Fresno, CA); and his five beloved grandchildren Wesley Hogan, Zachary Holmes, Caitlin Hogan, Devin Holmes, and Adam (“AJ”) Holmes, Jr. Born and raised in Newark, New Jersey, Dr. Holmes overcame barriers in becoming a leading physician of color with a specialty in Nuclear Medicine. He was a graduate of Lincoln University with a Bachelor’s degree in Biology (’54) and earned his medical degree at Temple University School of Medicine (’58). Dr. Holmes began his career with a Residency in Internal Medicine and a Fellowship in Metabolism/Endocrinology at Marquette University in Milwaukee. Dr. Holmes left Milwaukee to do a Fellowship in Nuclear Medicine at Johns Hopkins in Baltimore. He returned to Milwaukee where he served as an Assistant Professor of Medicine and Radiology. He went on to become an Associate and then full Professor of Medicine and Radiology and the Director of Nuclear Medicine at the Medical College of Wisconsin. Dr. Holmes left Milwaukee again to serve as a professor of Medicine, Radiology, and Nuclear Engineering at the University of Missouri-Columbia and as the Chief of Nuclear Medicine at both the University of Missouri Health Science Center and the Harry S. Truman Memorial Veterans Hospital. Dr. Holmes left academia to continue research and development at DuPont Merck and Mallinckrodt in Boston and St. Louis before retiring and moving to the Washington DC area to be near his grandkids. Dr. Holmes viewed practicing medicine as a matter of community service, but specializing in what was then the new field of Nuclear Medicine was so intellectually daunting that he almost gave up on his specialty. Dr. Holmes commented in 1994 that he persisted with a career in Nuclear Medicine because he realized “that I could use nuclear medicine in the service of my first love – caring for patients.” His work led to the development of a radiopharmaceutical that could ease the pain of bone cancer and research and years of research and development to help in the early diagnosis of thrombosis and breast cancer and the detection of infections. Dr. Holmes’ sense of service guided his work in other ways. During his Fellowship in Milwaukee he served honorably as a Reserve Army Captain in Wisconsin’s 32nd National Guard Red Arrow Infantry Division. In the early 1990s he took a sabbatical to join the faculty at the Charles Drew Memorial Hospital in East Los Angeles to help rebuild the Hospital’s residency program and expand training and professional opportunities for young doctors of color. Throughout his career he always saw patients, and was an eager and able teacher and mentor to dozens of medical students and young doctors. He was honored by his colleagues when he was elected as the President of the Society of Nuclear Medicine from 1989-1990. Dr. Holmes met Dodie in Baltimore where she was working as a nuclear medicine technologist. Dodie was a wonderful partner, and together they travelled extensively and took great pleasure in entertaining. Dr. Holmes put a high value on education, and his children followed their father’s sense of duty to use their professional skills to serve others; Mindy, a graduate of Northwestern University and Georgetown University Law School, is a lawyer who represents workers and labor unions, and Adam, a graduate of the University of Missouri and the University of California-San Francisco Medical School, is a Pediatric ICU doctor. Dr. Holmes took his greatest pride and pleasure in his grandchildren, but he also enjoyed walking his dogs, travelling, and even a little golf. For a number of years, he and Dodie enjoyed exploring the Baja Peninsula from a condo they owned in Cabo, Mexico. To honor Dr Holmes service and work, the family has set up a scholarship in his name at the University of Missouri. Anyone interested in donating can visit the Universities website at: http://tinyurl.com/holmesscholarship

The family of Richard Allen Holmes MD created this Life Tributes page to make it easy to share your memories.

Send flowers to the Holmes family.