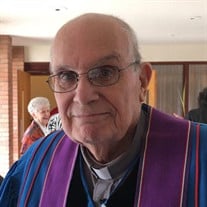 Rev. Dr. Paul O. Boger, Sr., 80 of Montclair NJ, passed away surrounded by his family on September 2, 2021. Paul was born to Eleanor DuBois and Otto John Boger on October 28, 1940. Paul was raised, and educated in Yonkers, NY. He graduated from Gorton High School in 1958. He received a B.A. from Bloomfield College, Bloomfield, NJ (1962) and a Master of Divinity (1965) and Doctor of Ministry (1985) from the McCormick Theological Seminary, Chicago, IL. In June of 1965 he was ordained by the Presbytery of Hudson River of the Presbyterian Church (U.S.A.). His pastoral ministry included service at: First Presbyterian Church, Greenville, OH (1965-1967), Otisville-Mt. Hope Presbyterian Church, Otisville, NY (1967-1971), and Bloomfield Presbyterian Church on the Green, Bloomfield, NJ (1971-2002). He was honorably retired by the Presbytery of Newark in 2002, after which he served as part-time pastor for the United Presbyterian Church of Cedar Grove, NJ (2006-2019). Paul served as Chaplain/Staff person at Woodstock Music Festival, Bethel, NY 1969. For the Presbytery of Newark, NJ, he served as Moderator of the Committee on Preparation for Ministry (1972-1974), Moderator of the Committee on Ministry (1974-1980), Moderator of the Presbytery (1980), Commissioner to the General Assembly (1980), and Stated Clerk of the Presbytery of Newark (2000 to 2006). At Bloomfield College, NJ, he served on the Board of Trustees (1978-1990), was Interim Chaplain (1984), founded the Interfaith Chaplaincy Program (1987-89) and co-founded the Interfaith Campus Ministry (1999). Paul published the Bloomfield College Alma Mater, “Lux in Tenebris” (1982) and the hymns “O Give Thanks unto the Lord” (1975), “USA Bicentennial Hymn,” “Glory to God” (1977), and “O Word Who Was When All Began” (1978), all with William N. Simon, composer.. Paul published his book Being There: A Pastor at Woodstock, then, now and tomorrow in 2009 and was near completion of his second book, Everything is Connected: God is dead, Long live God at the time of his death. He received many recognitions: Outstanding Young Men of America (1973), Inducted into the Bloomfield College Hall of Fame (1995), President’s Recognition Award, Bloomfield College (NJ) 2002, and Andrew McElwee Award of Caldwell College (NJ) 2003. Paul is survived by his beloved wife Carolee Palmiotto Boger, three children Christine Walthers (Mark), Laura Lynn Boger, Paul, O. Boger, Jr., a stepson Christopher Adam Pescatore, four grandchildren Dylan Boger, Peter Granata, Hudson Walthers, Elaine Walthers, a sister Nancy Satore Gobel Jones, a brother Mark Boger (Anne), many beloved nieces and nephews, and his first wife Barbara Ewick. Paul was predeceased by his sister, Elaine Boger, in 1982 and his daughter Leanne Boger Granata in 2015. In lieu of flowers, donations can be made to the Bloomfield Presbyterian Church on the Green for sanctuary restoration.

Rev. Dr. Paul O. Boger, Sr., 80 of Montclair NJ, passed away surrounded by his family on September 2, 2021. Paul was born to Eleanor DuBois and Otto John Boger on October 28, 1940. Paul was raised, and educated in Yonkers, NY. He graduated from... View Obituary & Service Information

The family of Rev Dr Paul O Boger Sr. created this Life Tributes page to make it easy to share your memories.

Send flowers to the Boger family.