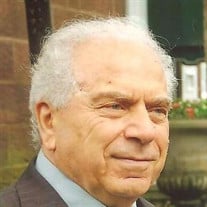 Ohannes "John" Ohanian, age 73 of Bloomfield, NJ, passed away Monday 10 March 2014. He was born on 13 January 1941 in Aleppo, Syria to Haroutoun and Meleke Ohanian (nee Maljian). In 1961, at the age of 20, he moved to the United States and graduated from the Newark College of Engineering with a B.S. in Electrical Engineering and Rutgers University with an M.A. in French Literature. He married Angela Ladagana in 1982 and had one son, John Vartan Ohanian. Ohannes worked with the United States Department of Defense, in Avionics Software and Systems Engineering for many years where he was held in high regard with respect to his expertise and experience. In his free time, he was an avid cyclist and enjoyed spending time bicycling in nearby county parks and along the Hudson River waterfront. An animal lover, he owned many pets such as dogs, cats and birds over the years. Ohannes loved to travel and enjoyed the opportunity to experience different cultures and speaking to people of various ethnic backgrounds. Ohannes is survived by his wife, Angela; son John; and daughter in law Margaret Anne. He is also survived by his mother Meleke, and siblings Therese, Nerses and Heripsime. Visitation will be held on Thursday, March 13, 2-4 pm & 7-9 PM Van Tassel Funeral Home, 337 Belleville Ave, Bloomfield, NJ. Funeral Mass, Friday, March 14, 10 AM Sacred Heart Armenian Catholic Church, 155 Long Hill Rd, Little Falls, NJ 07424 In lieu of flowers family is requesting donation to The Lustgarten Foundation, 1111 Stewart Avenue, Bethpage, New York 11714.

The family of Ohannes "John" Ohanian created this Life Tributes page to make it easy to share your memories.

Send flowers to the Ohanian family.