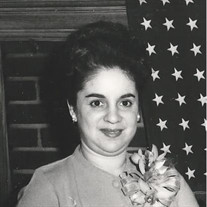 Ofelia Cecilia González was born on May 22, 1936 in la Provincia de Camagüey, Cuba. She moved to La Habana to attend La Universidad de la Habana, where she studied for years toward her doctorado in Education. The Cuban Revolution brought an end to her studies during her senior year. Ofelia married Eloy Domingo Hernández on October 20, 1961. Soon after the birth of their first child in August 1962, her husband was forced to flee Cuba for the United States, where he began preparing a new home for his family. The Castro regime, soon after, outlawed Cuban visas to the U.S., leaving Ofelia to care for their infant son without a clear path to reuniting with her husband. When her baby was able to travel, Ofelia was able to take him from Cuba to Madrid, España. The regime only allowed them to leave with the clothes on their backs; they confiscated her wedding ring when she left Cuba, but they missed her husband's wedding ring and her son's santo medallion hidden in the hollowed-out heel of her shoe. Within a year, with the help of family, friends and the Catholic and Presbyterian churches, mother and child were able to travel to the U.S.A., where they reunited with Eloy, who was waiting for them with a new wedding ring and a new place to call home. The young family settled in Bloomfield, New Jersey, where they both worked hard to build a new life in America. The trio earned naturalization and became Citizens of the United States in 1967. Ofelia and her family joined the historic Bloomfield Presbyterian Church on the Green, where worship, community and service filled their lives for over 50 years. Ofelia gained renown as an amazing cook, a devoted wife, a zealous mother and a doting grandmother. Ofelia passed on February 1, 2017, with her family, friends and The Rev. Ruth L. Boling at her side. She is survived by her husband of 55 years, Eloy Domingo; her eldest son, Luís Eduardo (Amy); her daughter, Maira Ofelia (Joseph J. Kinloch); her youngest son, Eloy Jesús; and four grandchildren, Jordan and Tyler Hernández, and Olivia and Matthew Kinloch. In lieu of flowers or donations, the family asks that you perform acts of kindness to animals, children and the elderly as you say Ofelia's name.

Ofelia Cecilia González was born on May 22, 1936 in la Provincia de Camagüey, Cuba. She moved to La Habana to attend La Universidad de la Habana, where she studied for years toward her doctorado in Education. The Cuban Revolution brought an... View Obituary & Service Information

The family of Ofelia C Hernandez created this Life Tributes page to make it easy to share your memories.

Send flowers to the Hernandez family.