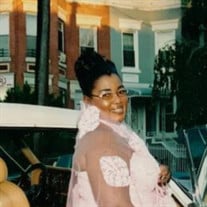 Nathalie Christina Born on Saturday, August 6th 1955at 7 o’ clock in the morning, at New Amsterdam Hospital Burbice to the blessed parents of Agatha and Dada Adopted parents of Mr. and Mrs. George and Iris Marian Freeman Senior. Nathalie was from birth a very blessed and talented child. Sheattended St. Theresa Roman Catholic School in New Amsterdam. Upon completing her schooling, she was picked to write the common entrance exam, which would allow her to attend the Burbice Educational Institute. She successfully passed the exam with flying colors and was awarded a seat to attend the high school. During her high school years, she attended the Home Economics Center in New Amsterdam Benons Commercial School and successfully graduated with certificate and diplomas. In her household, there were musicians and a piano so she was able to attend music lessons and was taught to play the piano. In 1972, Nathalie was blessed with a beautiful daughter Nicole and Iris M Jr. shortly followed in 1974 after a short marriage to Steve Carter deceased. She then was offered a position in the G D F G Guyana after the passing of her husband where he was placed in the Guyana Defense Force Department. Nathalie worked there from September 1975, and then was transferred to National Development associated with the Defense Force. During her employment in the Defense Force, she met her love Michael Harding and they tied the knot in September of 1978. On July 22nd of1982, Nathalie migrated to the United States where she aspired to do good to her colleges and community by going to school and furthering her academic background. In 1985, Nathalie was hired as a clerk at the Addabbo-FamilyHealth Center, formerly known as Payne Community Health Center in the Rockaway of Queens. She worked and studied hard and in doing so helped the clients she saw and interviewed for the New York State Women Infant Children (WIC) program. She did the State Smoking Sensation in 1992 and was awarded a certificate as the pilot program. In 1990, she started the PCAP Program Site 2 at Beach 20thStreetOffice at St. John’s Hospital Prenatal Clinic in the Rockaways. In 1995, she did a 5-year program with Cornell University with the State of New York Team Building Blocks for Toddler, where she was awarded a certificate. Nathalie was then interested with the position as the top stewart(senior clerk) in the department and was able to enroll mothers in the Breastfeeding Counselors Program. After she successful completed the training at the state level, she then enrolled herself in the Training Program of 1100 Union affiliated with City University where she is studied medical terminology, computer, and several other courses. In September 1999, Nathalie left Addabbo and went to Long Island College Hospital in Brooklyn. She worked as a administrative assistant in the home care department. In 2001 she then joined the staff at Center of Nursing and Rehabilitation Prospect Home Care Agency as the first speaking English supervisor coordinator of Casa and HRA patients. In 2002 she went to Metropolitan Nurses Registry Inc. In April 2003, she joined the Church Avenue Merchant Association where she did a few short courses in management and business. She successfully completed and incorporate her first cooperation in the state of New York in small business. In August 2004,she obtain her second corporation for her Wedding Bridal and Special Occasions Consultant and Coordinating? In July 2006 She was picked by the state and federal government to own and operate a Group Family Day Care in the Canaries neighborhood. Nathalie is a very loving, caring, and generous individual who you could always depend on. Nathalie always gave good advice, always kept her home and person very up to date. She liked nice and expensive things, always looked and dressed her best. She has two grand boys and one grand girl who she cares and loves dearly.

The family of Nathalie C Bishop created this Life Tributes page to make it easy to share your memories.

Send flowers to the Bishop family.