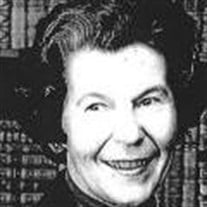 LACONIA, New Hampshire - Miriam Eastman Cook, a resident of the Taylor Community, passed away Nov. 3, 2014, at age 93. She was born in Laconia on March 30, 1921, the daughter of Carl and Florence (Amold) Eastman. After her mother died when she was 11, she went to live with her maternal grandparents, Louis and Flora Eastman on Union Avenue, and attended Laconia schools, graduating with high honors in 1939 from Laconia High School. She attended the University of New Hampshire where she majored in English and participated in many activities, graduating with high honors in 1943. After UNH, she was a flight attendant for American Airlines. After World War II, she married fellow UNH graduate, Capt. Richard F. Cook, an Army veteran who had been injured in the Battle of the Bulge. They lived briefly in Miami, moving shortly thereafter to Glen Ridge, N.J., when Dick Cook got a job as a writer and editor with the Ethyl Corporation in New York City. After Dick died of cancer in 1966, Miriam became an aide at the local high school and returned to college at Montclair State College to obtain her teaching certification and thereafter taught English at Glen Ridge High School and chaired the English Department for many years, contributing to the lives of hundreds of students. She also volunteered at the Glen Ridge Library and was an active member and volunteer at the First Baptist Church of Bloomfield, N.J. After retirement, she moved to Laconia in the late 1990s, joining her sister, Louise Gauthier, who also returned to her hometown after years of living elsewhere. She was a member of the United Baptist Church of Lakeport and took an active interest in the lives of her son, Attorney Bradford Cook, of Manchester, and his wife Kathleen, and her three grandsons, Richard and his wife Kim, of Sandown, James of New York City, and Thomas of Amherst. In addition to her son and his family, she is survived by her sister, of Meredith and her husband, John Gauthier, and many nieces, nephews and cousins, and her special friend, Cathy Hocking, of Charlotte, N.C., and her family. In addition to her husband, she was predeceased by her brother Kenneth and sister Norma. . Memorial gifts may be made to the Richard and Miriam Cook Family Scholarship Fund, UNH Foundation, Elliot Alumni Center, Durham, NH 03824.

LACONIA, New Hampshire - Miriam Eastman Cook, a resident of the Taylor Community, passed away Nov. 3, 2014, at age 93. She was born in Laconia on March 30, 1921, the daughter of Carl and Florence (Amold) Eastman. After her mother died when she... View Obituary & Service Information

The family of Miriam Cook created this Life Tributes page to make it easy to share your memories.

LACONIA, New Hampshire - Miriam Eastman Cook, a resident of the...

Send flowers to the Cook family.