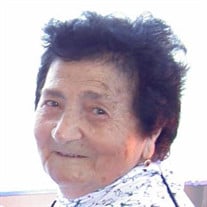 Meleke Ohanian was born on November 25, 1918 and died on June 16, 2014. Born in Marash, Turkey she survived the genocide at two years old and escaped with her older brother Vartovar, her father and mother (Bedros and Mariam) to start a new life in Syria. She had a very difficult childhood, living in camps in the early years until her father was able to gradually build a home and give her and her siblings,(Vartovar, Vehanoush, Francois, Serpouhi, and Rosemary) a better life. She got married at a young age to her husband Haroutioun Ohanian. In her early years of marriage she, unfortunately, lost all her children at birth or to disease. A set of twins at birth, as set of twins mid-trimester mid-carriage, and a two and ½ year old son, Sarkis, who died with seizures. She had her four surviving chidren (Therese, Ohannes, Nerses, Heripsime). Along the way she had multiple illnesses, multiple surgeries…surviving them all to live to a ripe age of 95. She spent most of her life, in America, after losing her husband for five years after being in the United States to heart attack. Dedicating all her energy to raising her children as well as philanthropic endeavors (putting pennies and dollars together to send to all kinds of charitable, religious and wildlife organizations). Her hope was to be philanthropic through her life. She loved to travel, she loved to read until the last four or five years. She gardened, she read, she travelled with her children. She raised, took care of and rescued many pets that she took care of as her children. She wanted to dedicate the products of all her years of hard work to charitable causes. She died peacefully after suffering for years with congestive heart failure joining her husband Haroutioun and her younger son Sarkis and older son Ohannes who proceeded her in death by three months. She is survived by her children Therese, Nerses and Heripsime and her grandson, Vartan.

Meleke Ohanian was born on November 25, 1918 and died on June 16, 2014. Born in Marash, Turkey she survived the genocide at two years old and escaped with her older brother Vartovar, her father and mother (Bedros and Mariam) to start a new life... View Obituary & Service Information

The family of Meleke Ohanian created this Life Tributes page to make it easy to share your memories.

Send flowers to the Ohanian family.