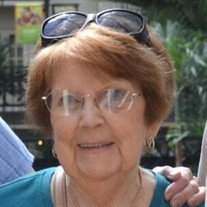 Knoxville - Margaret was born in Ibrox, Govan, Glasgow Scotland, June 8, 1923 to Samuel McIver Begg and Jessie Brown Milligan Begg. Her father was a wood patternmaker at the Govan shipyards on the River Clyde. He immigrated to the United States in order to find work during the post-World War I collapse of the Glasgow shipbuilding industry. Margaret emigrated as a child with her mother from Scotland to the United States to join her father in Newark, New Jersey. She graduated Central High School, Newark in 1941, and went to work at the Prudential Insurance Company of America. On July 20, 1957 Margaret married Robert Edward Peppel ("Bob") at St. Paul's Methodist Episcopal Church in Newark, and they settled in Belleville, N.J. She joined Bob's church, Fewsmith Memorial Presbyterian Church, and they reared their children, Alan and Ailsa, in that church. In 2003, she and Bob relocated from New Jersey to Knoxville, Tennessee, where they resided in the Buckingham community of Shannondale. Margaret was devoted to her family, and loved spending time with Bob, her children and their spouses, and her grandchild, Nina. She cared for her parents through their elderly years. She was a fantastic baker of breads, cakes, and Old World goodies of all sorts. She enjoyed reading, especially history, and possessed a quick wit. Margaret was proud of her humble urban Glasgow roots, which always remained near and dear to her. Margaret and her children grew up hearing her parents' stories of Scotland flavored with a Scottish burr and the Glaswegian dialect. Margaret was fortunate to have made two trips back to Scotland -- in 1948 and 1986. But above all, she loved her adopted country where she was reared and gained citizenship. She had fond memories of two cross-country trips to visit California family in 1928 and 1938, touring the U.S. along the way. During her later years, Margaret faced legal blindness due to macular degeneration and led a courageous fight against Stage IV breast cancer. She met many challenges by remembering Philippians 4:13, "I can do all things through Christ who strengthens me." Margaret and her family appreciated the excellent medical care and the big hearts of her ophthalmologist Bradley L. Pearman, M.D. and her oncologist Jashmin K. Patel, M.D. And, Margaret counted among her friends the wonderful therapy staff at WellPark at Shannondale. She was predeceased by her parents and her infant brother, James Merrilees Begg. Margaret is survived by Robert, her husband of 63 years; her children, Ailsa Margaret Peppel Schuller and AIan Edward Peppel; son-in-law, Lars, and daughter-in-law, Nancy; her granddaughter, Nina Alvarez Peppel; and nieces, nephews, and cousins. A service will be held at First Presbyterian Church, Knoxville, with the Rev. Dr. Jeff McCrory officiating. Memorial contributions may be made to the Cancer Support Community of East Tennessee or the East Tennessee Children's Hospital.

Knoxville - Margaret was born in Ibrox, Govan, Glasgow Scotland, June 8, 1923 to Samuel McIver Begg and Jessie Brown Milligan Begg. Her father was a wood patternmaker at the Govan shipyards on the River Clyde. He immigrated to the United States... View Obituary & Service Information

The family of Margaret Peppel created this Life Tributes page to make it easy to share your memories.

Send flowers to the Peppel family.