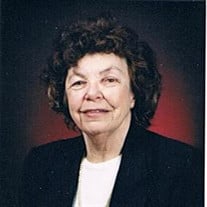 Lucille Margaret Lamborn (nee Haupin) passed away at the age of 101 quietly in her sleep, surrounded by family, on Sunday, August 30, 2020. Her extended circle of caring family and friends mourns the passing of an extraordinary life. A life-long resident of Bloomfield, she was a proud member of the “Greatest Generation”. A 1937 Bloomfield High graduate, she graduated from Cornell University in 1941 with a B.S. degree from the School of Hotel Administration, one of the first women to do so. She subsequently worked at the Hotel Astor in New York City. She found the love of her life, her beloved husband Richard, when they carpooled together from Bloomfield to Caldwell to the Curtiss-Wright Aeronautical Corp. where they both worked in manufacturing aircraft engines in the early war years. They were married in January of 1945 in Denver, CO at Lowry Air Force Base where he was stationed. When he was sent to serve in the Pacific Theater in Guam, she returned to Bloomfield. At the end of World War II, they raised a family there. Her passions were her family and friends as she became active as a volunteer in school, church and civic activities in the neighborhood of Willard Avenue, the street she where she lived for her entire life. She was a selfless caregiver to her mother and husband for many years. Favorite pastimes were watching the Yankees, reading novels by Mary Higgins Clark, enjoying chocolates people would bring her. She loved animals, and her many pets returned that love by their affection. She loved the Lord. She was a life-long member of the First Baptist Church. She rarely missed a Sunday service in her younger years, and later never missed Dr. Charles Stanley’s Sunday televised program. She was a “good and faithful “servant, who never missed the opportunity to say to her children that she was praying for them. Lucille is survived by her four children: daughter Karen Hager and husband Harry Hager of Chester, NJ; son Richard Lamborn Jr. of Milford, DE; daughter Jeanne Lamborn of Toms River, NJ; son Robert Lamborn of Bloomfield, NJ; two grandchildren Sean Quigley and wife Jennifer of Upper Darby, PA; Jeremy Quigley of Toms River, NJ; twin great-grandchildren Brooke and Paige Quigley of Upper Darby, PA; sister-in-law Elizabeth Haupin of East Brunswick, NJ; nieces and nephews Dr. Barbara Greene of Bloomfield, NJ; Cheryl Sickles of Wynnewood, PA; George Haupin and wife Regina of Hammonton, NJ; Linda Curry and husband Rob of North Brunswick, NJ; James Haupin and wife Sally of Yardley. PA; Rob Haupin and wife Courtenay of Belvidere, NJ, as well as countless grand nieces and nephews and their children. She is predeceased by her beloved husband Richard Gordon Lamborn of Bloomfield, NJ in 1991; parents James and Margaret Haupin of Bloomfield, NJ; brother George Haupin of East Brunswick, NJ; Sister Jean Sickles and husband Dr. Walter Sickles of Ithaca, NY and niece Christina Sickles Merchant of Ithaca, NY. She will be buried next to her husband and parents in the Pottersville Reformed Church Cemetery in Pottersville, NJ, where her parents had a summer home (“The Farm”) as she was growing up. The extended family has many fond memories of happy times spent there. Donations may be made in her name to the First Baptist Church, 1 Washington St., Bloomfield, NJ 07003. Due to Covid-19 the service will take place at a later date.

Lucille Margaret Lamborn (nee Haupin) passed away at the age of 101 quietly in her sleep, surrounded by family, on Sunday, August 30, 2020. Her extended circle of caring family and friends mourns the passing of an extraordinary life. A life-long... View Obituary & Service Information

The family of Lucille Margaret Lamborn created this Life Tributes page to make it easy to share your memories.

Lucille Margaret Lamborn (nee Haupin) passed away at the age...

Send flowers to the Lamborn family.