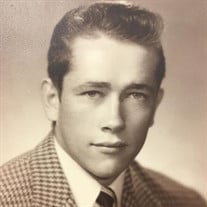 It is with great sadness that the family of John Thomas Sweeney, Jr. (1933-2017) announces his passing on November 4, 2017. John, born in 1933 in Gerritsen Beach, Brooklyn, was the son of the late John T. and Kathleen Gibbons Sweeney, the oldest of seven brothers. He is survived by the mother of his children and former spouse, Janet Sweeney, and his beloved daughters, Maria Sweeney and husband David Sehr; Anne Sweeney-Meade and husband TJ; as well as his four grandchildren: Brendan, Ryan, and Emma Meade, and Matthew Sehrsweeney. John will be lovingly remembered by his surviving brothers: William, Patrick, and Dennis. John was predeceased by his brothers Charlie, Austin, and Walter. John served in the U.S. Army from 1954-56, and worked as a salesman for APA Transport for most of his career. Most recently John lived at Job Haines Home in Bloomfield, N.J., since suffering a major stroke in 2003. The people at Job Haines Home were John’s second family and cared for him skillfully and lovingly. John was passionate about baseball his entire life. After high school, John received a baseball scholarship from Cornell University, where he graduated with a B.S in agricultural economics. John also received an invitation for a tryout with the N.Y. Yankees. Although he was never drafted by the Yankees, he was a lifelong, diehard Yankees fan, who wore at least one item of Yankee clothing every day. John’s love of the sport, and his enthusiasm for the Yankees’ team was contagious. He shared this with his family by taking his daughters to many games. John loved watching his daughters play sports, and coached them in swimming and softball. He was very supportive of and participated in all his daughter’s endeavors, never missing a single Rutgers race where his daughter Maria was coxswain. John loved watching his daughter Anne swim competitively and very successfully. John loved traveling and enjoyed a wide range of adventures. He once bought a used motor bike he named “Ramblin Rose.” John would sing while taking his children for rides near their grandmother’s country house in the Catskills Mountains. John was a smart and fun-loving soul who shared his passion for life with all who knew him. He was dearly loved by his family, and all those who were lucky enough to call him a friend. A celebration of John Sweeney’s life will be held at 10:30 am on Saturday, November 25, 2017 at Resurrection Church located at 2331 Gerritsen Ave, Brooklyn, NY 11229. In lieu of flowers, the family requests that donations be made to “Job Haines Home,” the place that cared so well for John for so many years. The check should be written to "Job Haines Home." These are tax deductible charitable donations. The checks should be sent to: Noreen Haveron, Job Haines Home, 250 Bloomfield Ave., Bloomfield, NJ 07003

It is with great sadness that the family of John Thomas Sweeney, Jr. (1933-2017) announces his passing on November 4, 2017. John, born in 1933 in Gerritsen Beach, Brooklyn, was the son of the late John T. and Kathleen Gibbons Sweeney, the oldest... View Obituary & Service Information

The family of John T. Sweeney Jr. created this Life Tributes page to make it easy to share your memories.

It is with great sadness that the family of John Thomas Sweeney,...

Send flowers to the Sweeney family.