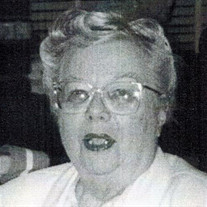 Jane Hall Northwood died at her home in Montclair November 13, 2019. Jane was born to Roland Cleveland Hall and Ruth McComb Hall in New York City July 26, 1923. She graduated from Montclair High School in 1941, matriculating to Bryn Mawr College. She interrupted her college education at the end of her junior year to join the U.S. Naval air corps as a navigator flying missions from San Diego into the Philippines, bringing supplies to the forces stationed there and returning wounded to the United States. As WWII was coming to a close she was reassigned to Naval Air Station Ellyson Field, Pensacola Air Station, FL where she caught on the women's hardball team, coached by the Boston Red Sox's Ted Williams. While there she also met and married fellow officer, Leo Cutaia. After discharge from the Navy and giving birth to her son, Stephen, she returned to Bryn Mawr, completing her degree requirements. From there Jane ultimately landed an editor's job with the newly created Chemical Week (a McGraw-Hill publication) where she worked for about 6 years before moving over to becoming the first female editor for Business Week magazine (now Bloomberg Business Week). At Business Week she became the first writer for a national publication to write about the U.S./U.S.S.R. space race. She remained at Business Week until her retirement in 2001. In 1959 Jane married Arthur Northwood, Jr. In retirement she busied herself with her family and friends and by becoming the honorary secretary of her late second husband's Princeton University class of 1935. Jane is survived by her son Stephen Lee Cutaia of Montclair, nephews Malcolm Hall, Jr. of Darien, CT, William McComb Hall of Denver, CO and nieces Beverley Douglas Hall of Big Horn, Wyoming and Virginia Kelley Hall of Bandon, OR. There will be a viewing on Saturday, November 23, 8:30 AM – 10:30 AM at Van Tassel Funeral Home, 337 Belleville Avenue, Bloomfield, NJ followed by Graveside Service and interment at Mt. Hebron Cemetery, Montclair. In lieu of flowers, donations in her honor will be welcomed by the American Heart Association and the American Cancer Association.

The family of Jane Hall Northwood created this Life Tributes page to make it easy to share your memories.

Jane Hall Northwood died at her home in Montclair November 13,...