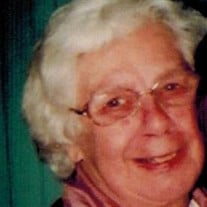 Elizabeth Jane Atchison Schuemann, 84 of Glen Ridge passed away December 2, 2014 at Mountainside Hospital, surrounded by her family. She is preceded in death by her husband Charles E. Schuemann, on May 28, 1959. The couple married on April 12, 1952. Born January 7, 1930 in Jersey City, NJ. She was the daughter of the late George and Elizabeth (Abel) Atchison. Betty Jane as she was known moved to Glen Ridge with her family in 1932, and has lived there her whole life except for the seven years she was married. Betty Jane went through the Glen Ridge Schools, starting at Sherman Avenue School and graduated Glen Ridge High School in 1948. In 1960, she attended Rutgers School of Nursing in Newark, NJ and in 1962 graduated with her RN. She worked at Mountainside Hospital for many years in the Pediatric ward. After leaving the hospital, she worked briefly at Cherry Nursing Home, Montclair, and then worked as the infirmary nurse at the Mutual Benefit Life Insurance Co in Newark till 1997. Upon retirement she worked as a receptionist for a travel agency and then as a receptionist at Centerbury home at Cedar Grove. Betty Jane was a member of Bloomfield Presbyterian Church on the Green, Bloomfield. She started with the church at age 18 months when it was called “Old First”. She loved her church and the beautiful stained glass windows. Betty Jane was a member of the Order of the Eastern Star, Nutley Chapter No. 21 where she was a Past Matron and Past Grand Officer, for OES Grand Chapter NJ. She was also a member of the Daughters of Scotia, Lady Cameron Lodge No. 58 and was a Past Chief Daughter. She was a loving and devoted mother and grandmother. Her life revolved around her 3 children and her 2 grandchildren. She was extremely proud of all of them. Betty Jane loved to watch her granddaughter dance and never missed a recital. She was bursting with pride as her grandson became an Eagle Scout, Troop 1 Honesdale PA. Betty Jane will be missed by all who knew her and loved her. Betty Jane is survived by her 3 children: Betsy Lacey, husband Frank of Tyler Hill, PA, Laurie and Chuck both of Glen Ridge. Her two grandchildren Betsy and Bubby of Tyler Hill, PA. She is also survived by her sister Ruth Anne Mayer of Brick, NJ and Martha Thomas of Port Charlotte Florida, nieces and nephews. Besides her husband and parents, she is preceded in death by her two brothers James and her baby brother Robert. There will be the Daughters of Scotia Service on Saturday, December 6, at 4:00PM followed by a service of an Eastern Star at 4:30 PM. Visitation: Van Tassel Funeral Home, 337 Belleville Ave, Bloomfield, NJ Friday December 5, 2014 from 6:00 PM – 9:00 PM, Saturday 3:00 PM – 8:00 PM. Funeral Service: December 8, 2014, 10:00 AM Bloomfield Presbyterian Church on the Green, 147 Broad Street, Bloomfield followed by interment at Glendale Cemetery, Bloomfield, NJ

Elizabeth Jane Atchison Schuemann, 84 of Glen Ridge passed away December 2, 2014 at Mountainside Hospital, surrounded by her family. She is preceded in death by her husband Charles E. Schuemann, on May 28, 1959. The couple married on April... View Obituary & Service Information

The family of Elizabeth Schuemann created this Life Tributes page to make it easy to share your memories.

Send flowers to the Schuemann family.