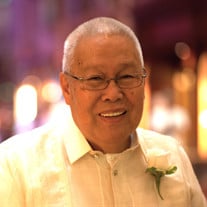 Eduardo M. Gaerlan M.D., age 72 of Belleville, NJ, passed away on June 5, 2015. He is survived by his wife Sonia Tuason-Rufin, two daughters Tina and Elizabeth, with her husband Ernesto Mendoza, Jr., one grandson, and two stepdaughters, Dianne Rufin Notarfrancesco with her husband John, and Milna Rufin. He is also survived by four sisters, one brother and their families. Eduardo was born in Masbate, Philippines, and is predeceased by his parents, Gil and Robina, and his first wife, Maria Paz Baula Gaerlan. He was a dedicated physician at Coler-Goldwater Memorial Hospital in New York. He was also a very spiritual man, and he and his wife often took mission trips to the Philippines to serve those in need. Eduardo loved talking politics, watching sports and taking care of his grandson. He was a good man by all accounts, and he will be greatly missed by his family and friends. Visitations: Sunday, June 7, 4:00 p.m. – 8:00 p.m., Monday June 8, 4:00 p.m. – 8:00 p.m. at Van Tassel Funeral Home, 337 Belleville Avenue, Bloomfield, NJ 07003. Funeral Mass will take place on Tuesday, June 9 at 10:00 a.m. at Our Lady of Mt. Carmel Church, 120 Prospect Street, Nutley, NJ, followed by private cremation.

The family of Eduardo Gaerlan created this Life Tributes page to make it easy to share your memories.

Send flowers to the Gaerlan family.