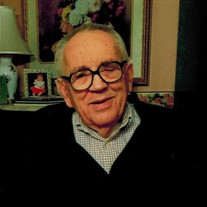 Donald C. Fisk, 89, a lifelong resident of Bloomfield, NJ went home to be with the Lord on Monday, August 8, 2016. Mr. Fisk was a 1944 graduate of Bloomfield High School and received a civil engineering degree from Union College in Schenectady, NY in 1949. He interrupted his college studies to join the Navy in February 1945. He served in the Pacific Theater on the USS Antietam. He married the former Dena C. Rude of Newark, NJ in 1952. Initially, they resided in Pittsburgh, PA where he was employed as a civil engineer for the Pennsylvania Railroad. Returning to Bloomfield, he worked for the Air Force as a civilian inspecting projects around the world. One of the most extensive was the Distant Early Warning Line, a cooperative defensive project with Canada and also located in Alaska. He later worked in the NYC District Office of the North Atlantic Division for the US Army Corps of Engineers, retiring in 1995. He was very active in the service of First Baptist Church in Bloomfield where he had served as a trustee for many terms since 1959. This brought him much joy, as he was able to use his gifts and talents to serve the Lord. He is survived by his two daughters, Carol J. Hughes and her husband Steve, of Baldwin, MD and Jane F. Pierce and her husband, Mark, of North Caldwell, NJ. He also has eight married grandchildren, Christopher and Carolyn Hughes, of Newport News, VA, Jason and Jennifer Hughes, of Gambrills, MD, David and Meghan Hughes, of Fairfax Station, VA, Benjamin and Nicole Hughes, of Nottingham, MD, Laura and Peter Erickson, of Fort Hood, TX, Timothy and Ruby Hughes, of Rineyville, KY, Meredith and John Enquist, of Round Hill, VA, and Kimberly and Christopher Berdos, of Woolwich Township, NJ. Additionally, he had sixteen great-grandchildren. His wife Dena, preceded him in death, in 2002.

Donald C. Fisk, 89, a lifelong resident of Bloomfield, NJ went home to be with the Lord on Monday, August 8, 2016. Mr. Fisk was a 1944 graduate of Bloomfield High School and received a civil engineering degree from Union College in Schenectady,... View Obituary & Service Information

The family of Donald C Fisk created this Life Tributes page to make it easy to share your memories.

Send flowers to the Fisk family.