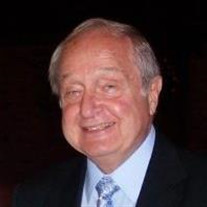 Charles A. Hutnik, 80, of Glen Ridge entered into the loving arms of Jesus, Tuesday, April 16, 2019, at his home surrounded by family. Born June 12, 1938 in Margaret Hague Hospital, Jersey City, NJ., he was the son of the late Andrew and Julia (Relovsky) Hutnik. He graduated from Memorial High School, Jersey City, NJ in 1957. He was on active duty in the United States Army from October 10, 1957 - October 1, 1959, doing his basic training in Fort Benning, GA and was stationed in Germany. He was honorably discharged on September 30, 1963. Charlie was a proud patriotic American! Charlie was employed for 39 years, 11 months by the phone company. He started out with New Jersey Bell as a lineman. Through the years Bell became Verizon and he retired as a manager. Charlie met Pope John Paul II, in October 1995, when The Pope visited the Sacred Heart Cathedral in Newark, NJ. Charlie was proud that he was in charge of running the telephone lines for the Pope’s security. He received the Superior Achievement Award for having more than 25 years of perfect attendance. Charlie was a gentleman of integrity and honor. Charlie was a good natured, kind, generous and loving man who never complained and would lend a helping hand to anyone in need. He loved family gatherings and getting together at holidays. He was always there for his family, encouraging and supporting everyone, especially his wife. He enjoyed traveling with his wife. He cherished making memories with his family, especially his grandchildren. He was so proud to be an Eagle Scout Mentor to his grandson. He had a sharp mind for remembering dates and events and enjoyed history and politics. Watching movies, playing cards and Rumicub were some of his pastimes and he was a food connoisseur. Charlie was known for being a master at telling jokes and loved to make people smile. He is survived by his wife of 50 years, Joanne (Iatesta) Hutnik; two daughters, KimMarie DiPasquale and her Husband John, and Krista Schaible and her husband Carl; four grandchildren, Colton, Hannah and Sarah Schaible and Abigail Rose DiPasquale. He is also survived by one brother, Raymond Hutnik and his wife Adele; sister-in-laws Annette Jacobsen and Marie Hutnik; a brother-in-law John Iatesta and his wife Nancy; and many nieces and nephews. In addition to his parents he was preceded in death by brothers Andrew, Joseph and William, three infant sisters, Mother and father -in-law Elizabeth and Michael Iatesta, brother-in-law James Jacobsen, sister-in laws Susan Iatesta, Eva Hutnik and Marie Hutnik. Viewing will take place on Friday, April 19, 4-8 PM and 8AM Saturday, April 20, at Van Tassel Funeral Home, 337 Belleville Ave, Bloomfield, NJ 07003. The Funeral Service will be held Saturday, April 20, 9:00 AM at Grace Presbyterian Church, Montclair, NJ with pastors Rev. Dr. Paul Leggett, Grace Presbyterian Church, and Bishop George Lucey, St. Francis of Assisi, Glen Ridge officiating. Interment will follow at Restland Memorial Park in East Hanover. You always have been and will continue to be loved and cherished. It is difficult for us to imagine our lives without you in them, but we take comfort in knowing that you are now free from all your pain and physical limitations and you can reside in the arms of your loving Lord and Savior dancing and singing with the Saints in Heaven! .

Charles A. Hutnik, 80, of Glen Ridge entered into the loving arms of Jesus, Tuesday, April 16, 2019, at his home surrounded by family. Born June 12, 1938 in Margaret Hague Hospital, Jersey City, NJ., he was the son of the late Andrew and Julia... View Obituary & Service Information

The family of Charles A Hutnik created this Life Tributes page to make it easy to share your memories.

Charles A. Hutnik, 80, of Glen Ridge entered into the loving...

Send flowers to the Hutnik family.