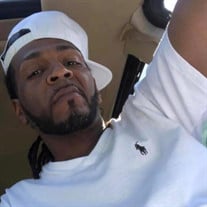 Charles Brooks passed July 29, 2020. He transitioned at home surrounded by love, peace, and family. Charles, affectionately known as Mann, was born in Newark, New Jersey to Charles Conley, Jr, and the late Martha “Patti” Conley. He was a proud product of the Newark Public School system. He went on to obtain a HVAC certification from Lincoln Technical Institute. He was an amazing, bilingual performer and lyricist. He was greatly respected in the local and national hip-hop and cannabis communities. Mann loved traveling and his family. He loved them so much that he and Dionna often traveled the country to promote the RUNNEWJRZ brand. As the pair would travel they never met a stranger and eventually added to their extended family. This would just create more reasons to travel and promote people on the healing benefits of cannabis. He leaves to cherish his memory his father Charles Conley, Jr, wife Dionna Brooks, his two daughters DaZhaona and Ashanti, his sisters and brothers Evette, Korey, Chantel, Marquise, Melissa, Najee, Amir, Robert, William, Chante, Chanelle, Alexander, and Alnisa Conley, aunt Alice, uncle Otis, his mother-in-law Mary Ann Evans, and a host of nieces, nephews, cousins, god-children, and friends who became family. His beloved mother Martha “Patti” Conley preceded him in death. Funeral Podcast: https://www.facebook.com/lefty.grimes/videos/3580411595324254/

The family of Charles Dashon Brooks created this Life Tributes page to make it easy to share your memories.

Send flowers to the Brooks family.