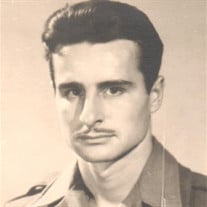 Albert Marchesani passed away after a long life on July 4th 2014. The son of Ellis Island Italian immigrants Pietro (Peter) Marchesani and Nevicella (Nellie) Mattia Marchesani, he was born in Newark NJ on August 30th 1919. He moved to Bloomfield NJ and grew up with 7 brothers and sisters in their family home at 10 Second Street, eventually settling with his wife and family at 223 Spruce Street. He was a graduate of Bloomfield High School and used his innate talent as a skilled machinist until he enlisted in the US Army in 1939. While stationed at Fort Lewis near Tacoma Washington, he met and married his wife, Clare Zier. Mr. Marchesani obtained the rank of Master Sergeant in the 44th Signal Corps, and then was sent to the European Theater in 1943. He was in charge of the 2nd Echelon Repair Shop and Motor Pool where he maintained 70-100 vehicles. He was responsible for supervision of automotive maintenance 1st and 2nd Echelon, 7 mechanics and 115 drivers. He checked records and supplies for signal and ordance equipment, requisitioned and issued supplies, and salvaged equipment. He was then attached to the 106th infantry division in 1944 where he sustained injuries on the front line in the Battle of the Bulge and was awarded the Purple Heart. Returning to Bloomfield after military service, he struggled to find an employer open to hiring a war veteran. Al, as he was known by friends and family, eventually worked for over 30 years with his brother at Hardy Bookcraft Inc. in Newark NJ, where he ran a business and maintained all of the machinery. An active member of St. John's Lutheran Church in Bloomfield, Al became a deacon, and as president, revived the Men's Club for over a decade. He served on many boards, and was instrumental in maintaining the structure and grounds of the church. He repeatedly tried to grow azaleas, vegetables and fruit trees in his Spruce Street yard. An avid do-it-yourselfer, he often whistled big band tunes while he worked in his impeccably organized workshop, repairing and rebuilding his home and its contents. He was a loyal fan of the New York Yankees. Soon after retirement, he and his wife moved permanently to their summer home in Chadwick Beach Island NJ. They enjoyed beaching it, crabbing off the dock, boating and deck barbeques. The Marchesani residence was known for annual spectacular displays of impatiens. They were members of the Good Shepherd Lutheran Church in Point Pleasant. In 1998 he and his wife began spending winters in Venice Florida, where they made many friends. They were members of the Lakeside Lutheran Church, Venice Florida. In 2009 his wife of 65 years succumbed to cancer, and shortly after Al became a member of the Sunrise of Randolph Assisted Living Community, where he again made many friends. After a private service with military honors, Al Marchesani was buried at Bloomfield Cemetery. He requested donations in his memory be made to Good Shepherd Lutheran Church 708 New Jersey 88, Point Pleasant, NJ 08742 He was predeceased by sisters Phyllis Comey, Dorothy Record, Esther Sicignano Gloria Tierney; and brothers Vincent, Alfred and Michael. Survivors include daughters Alberta Marchesani; Dayle Marchesani-Clifford and her husband Jimmy Clifford; son Kevin Marchesani and his wife Noreen; four grandchildren; Seth Clifford (wife Aimee), Sacha Clifford Marcucci (husband Justin), Joseph Munno, Frank Munno; and 4 great grandchildren, Declan, Finnleigh, Maeve, and Eavan

Albert Marchesani passed away after a long life on July 4th 2014. The son of Ellis Island Italian immigrants Pietro (Peter) Marchesani and Nevicella (Nellie) Mattia Marchesani, he was born in Newark NJ on August 30th 1919. He moved to Bloomfield... View Obituary & Service Information

The family of Albert Marchesani created this Life Tributes page to make it easy to share your memories.

Albert Marchesani passed away after a long life on July 4th 2014....

Send flowers to the Marchesani family.